The 2021 season marked the 40th year of the club being based at the Gallows & a tournament was held on July 4th to mark the occasion. This was won by Alan Lawson & Becky Palmer. Lunch was arranged afterwards at the sports centre. To mark both Robert North’s 80th birthday & his standing down from the committee having held several positions over many years, he was presented with a garden seat on behalf of the club.

The ladies had enjoyed some really good matches, but with strong opposition & difficulties getting a team on some occasions, they had suffered some heavy losses & were relegated at the end of the season.

For the Castle Acre team, Becky reported that the team had only lost 1 match, against North Elmham, drawn 1 & won the rest, so finished joint 2nd. She had asked as many different players as possible & thanked them all for playing.

For the men’s team Bryan said that they had won 2, drawn 2 & lost 6 of their matches, in a division of some very strong teams & a second group of similar standards. They had finishing above Marsh, on the same points as Taverham & only 2 points behind Reepham, but in relegation position through game difference. He said that he had struggled to get players at the end of the season & had played Taverham with only 1 pair.

The courts have not yet deteriorated too much there was very little chance of us getting any help from the centre to get them re-surfaced, but that this was an item in the centre’s business plan.

The planning permission for the new clubhouse had been granted, but because of rising costs & the fact that Grocott & Murfitt seemed to have withdrawn from this project, there is no way that we can continue with that plan at present. Mike suggested that we investigate Norfolk community funding as a possible financial funding. Bryan had spoken to Gary Sutton, the centre’s groundsman & he is willing to attempt to lift the current clubhouse so that we could put some more substantial supports underneath, which should help.

It had been a very good year of coaching & the numbers had risen, although nights had varied vastly, especially recently, as COVID had affected the local schools. She said that there are 2 – 16-year-olds, who she has invited to come up to senior club, & she hopes we will see them soon. Becky has done training for the ‘tennis for kids’ course & has run a course at Fakenham.

There is a quiz booked for Saturday March 19th 2022 & it was agreed that due to the rising & set costs of meals at the Gallows, we would no longer offer a meal with the quiz & could therefore drop the price to £5 per head.

It was agreed that we would like to have a tournament & the date for this was set as Sunday, April 10th.

Due to the covid 19 restrictions all projects were halted in 2020, but hope to resume in the near future.

Meetings with the North Norfolk District Council have continued throughout the year & they still  continue to honour their commitment to try improve tennis facilities in their area.

Quotations have been received for the various plans for our courts, along with others in the N.N.D.C. area, & we are waiting for approval from the council to see whether the full amount required for all these improvements is available.   We would expect that some, if not all, of these improvements will be made in the near future.

As a result of all this the ladies & mens teams have retained their places in their respective divisions for next season & the C.A. team have retained the league trophy that they won last year.  The only remaining summer match is the terry chivers tournament on sept 22nd & the club would love to finish the season winning that, having started the summer by winning the friendly tournament played against the team from Stebbing in Essex.

For the first time the club has entered a team in the Winter League, so will start of in Division 6 of this.  These matches will be played at home clubs where the clubs are reasonable distance from each other, but as the league includes team from as far apart as North Norfolk & down to Southwold in Suffolk, several matches are played at lime tree road in Norwich or indoors at Easton College.   These are played on Sunday mornings, with 4 sets of mixed tennis followed by 2 sets of ladies & mens, so something completely different for Fakenham.

There was also success for the club, winning the 2019 Terry Chivers’ Cup and for Becky, who won the club tournament; again 🙂 Well done to all those who took part in both tournaments.

Firstly, a huge thank you to our members who make the club what it is.

We had another really successful 2018 winning the Castle Acre league and in October, we lost the Terry Chivers’ Tournament in a nail-biting final set battle. A great day had by all, even if we didn’t come away with the cup!

In addition to the tennis, we had a great social night at the Superbowl Escape Room in Feb this year, I think everyone escaped!

And lastly, we had our Working Party in early April. I was well supported by members who gave the courts and clubhouse a spring clean ready for the year ahead.

We hope to see you all in 2019 and happy to welcome new members. 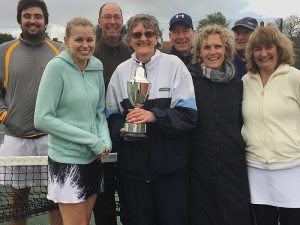 A big congratulations to our team of 8 who won this years Terry Chiver’s Tournament against, and hosted by, Burnham Market!

The conditions were challenging (to say the least), with a mix of wind, cloud, rain and sun; but they persevered and were victorious! And all followed by a fantastic BBQ.

WELL DONE and some more silver for the cabinet.

The final results have now been released for all leagues and it’s good news for Fakenham. Due to the stellar efforts of all involved, we’ve retained our places in each league!!! WELL DONE EVERYONE!!!!

For a full list the results take a look at the fixtures page.

In the autumn of 2015, Ben, together with a friend, has been able to remove our old floodlighting & get some new L.E.D. lighting put up (despite it being an extremely hot day!!) & so winter evening tennis is much improved.

With good facilities & a successful coaching program in place, the club is looking forward to a secure future. 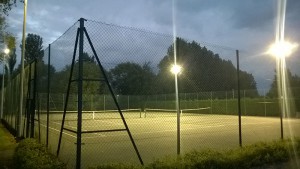 Last week saw our new flood lights installed which has already made a huge difference with the nights drawing in.

The light is far whiter and less artificial which really makes picking the ball up a lot easier.

As we become more and more reliant on the lights as the winter nights draw out we’ll really notice the difference.

Many thanks to our resident electrician for installing them. You know who you are!!!

This year brought us another great season. The mixed team in the Castle Acre league finished joint second. The ladies team were back in Division 2 and did really well to remain for next year finishing 5th despite many match rearrangements causing difficulty in arranging teams.

The men are also maintaining their place in Division 5 although the exact position is not know yet. Again, a number of matches had to be rearranged which did make team selection difficult.

Equal congratulations and thanks to all those that took part.